Bob Saul was raised on a cattle ranch that was originally part of the Lazy F Ranch, founded in 1876 and purchased by Charles Goodnight in 1882 as part of the historic JA/Goodnight ranches in the 'rough-country' caprock canyons of the Texas Panhandle at Quitaque (kit'-ah-kway), Texas. 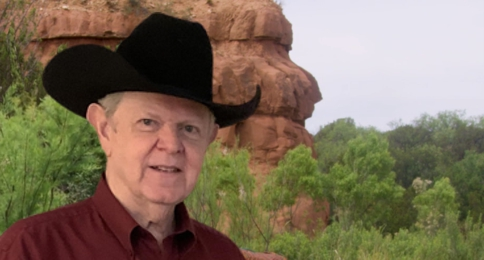 Both his heritage and the region around Bob's boyhood home inspired his love of history.

The Saul family settled in Texas south of Nacogdoches in 1821, making Bob a seventh-generation Texan. His great-grandfather rode the Sedalia and Baxter Springs Trail once, the Chisholm Trail three times, and the Great Western Trail three times from Brushy Creek just north of Austin.

His hometown of Quitaque is surrounded by major historic sites, including Los Lingos (Las Lenguas) Canyon, also known as the Valley of Tears, a primary site where Comanche and Kiowa traded with the Comancheros. Some contend this was the place Cynthia Ann Parker was taken after her capture by the Comanches in 1836. Quitaque is also the site of Camp Resolution of the tragic 1841 Texan Santa Fe Expedition. The Quitaque Peaks can be seen on the southern horizon while to the north is the beautiful Caprock Canyons State Park, home of the Official Texas State Bison Herd, and in town is the Comanchero Canyons Museum.

He has a bachelor's degree in radio/TV/film and religion with a minor in history from Baylor University. He has served as editor, vice-president, and president of publishing companies in Texas and Tennessee. For 26 years, he maintained a dual career as a consultant in volunteer program management for four national non-profits while he owned and operated a custom software business in New York City.

When the 9/11 terrorist attack on the World Trade Center impacted Bob's family-owned custom software business, they moved the company to downtown Fort Worth where he and Nancy, his wife of 56 years, and their family, now operate three family businesses.